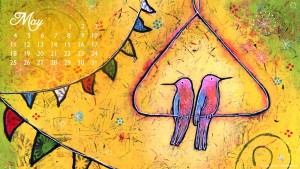 Warsaw Philharmonic
Founded in 1902, the Warsaw Philharmonic is one of Poland’s oldest institutions. Before the outbreak of World War II, many of the great composers and soloists of the day performed with the Orchestra, including Grieg, Prokofiev, Rachmaninov, Ravel, Richard Strauss and Stravinsky. Experience the wonder of Warsaw Philharmonic on Sunday 10th May 2015 at 3pm at Usher Hall’s Symphonies for Sundays for a programme of Schubert Symphony No. 3 in D major and Beethoven Symphony No. 9 in D minor. Call 0131 228 1155 or head to the website for tickets and further information.

Scotland’s Big Nature Festival
Interested in wildlife? Love the outdoors? There’s fun for all at the family at Scotland’s Big Nature Festival on May 23rd and 24th from bushcraft and wildlife photography classes to science workshops, farmer’s market and live music. Whether you’re a keen birdwatcher or simply cherish a love of nature and wildlife, you will find lots to inspire at the Festival. With all proceeds going to support RSPB’s conservation work, attending this year’s event is the perfect way to ensure Scotland remains a fantastic home for wildlife. The event will take place at the beautiful Levenhall Links alongside the Firth of Forth and famous racecourse at Musselburgh, just east of Edinburgh.

Edinburgh Marathon
The Edinburgh Marathon, taking place on 30th and 31st May 2015 is Scotland’s largest running festival of its kind with over 30,000 runners expected to take part in 2015. With 7 races over 2 days including the marathon, half marathon, team relay, 10k, 5k and junior races, there really is something for everyone.

Volkfest
Plymouth Volkfest is proud to say it is now in its 8th year and still going from strength to strength. Way back in 2007, five friends decided to try and do a Vee Dub show with a difference, with camping, partying and festivals. Each year the festival just gets bigger and better. For 2015, the Main Stage includes Ocean Colour Scene, Wilko Johnson, Atomic Kitten, East 17 and Finley Quaye – to name a few! From 22nd-25th May at Newnham Park, PL7 5BN.

Food Festival
Now in its fifth year, the Pantiles Spring Food Festival is set to take place again on May 15th-17th 2015 in the historic heart of Tunbridge Wells. Building on the success of past festivals which have enjoyed crowds of up to 10,000 people, culinary fans will be treated to stalls selling hot and cold food and drink from across the UK. Bookings are being taken for the event at the website.

Jeff Koons at the Artist Rooms
Jeff Koons is widely regarded as one of the most important, influential, popular and controversial artists of our time. He is famous for iconic works such as Puppy, a four foot sculpture which stands outside the Guggenheim Museum in Bilbao. This exhibition will be the only chance to see his work in the UK in 2015 and includes some of his best known pieces such as Winter Bears, 1988. The exhibition was featured in CNN’s list of top 19 events ‘worth travelling for.’

Norfolk and Norwich Festival
Running 8th-24th May 2015, this year’s Festival sees more originally commissioned work than ever before. The theatre highlight is Wolf’s Child, a dark fairy tale set in the woods at Felbrigg Hall created by one of the world’s leading site specific theatremakers WildWorks. The site specific theme continues with the latest creation from The Voice Project: The Observatory takes us on a cosmic choral journey around the Sainsbury Centre for Visual Arts and UEA Broad. For the full schedule go to the website.

51st Cambridge Folk Festival
The line up for this year’s internationally recognised Cambridge Folk Festival (30th July-2nd August 2015) has been announced and promises inclusive fun for all ages, placing finger pickers alongside Jamaican brass, a silent ceilidh and a selection of exceptional women – not least the American folk singers Joan Baez and Peggy Seeger. To purchase advance tickets go to the website.

The Mill, The Plough and Three Horseshoes
These were just a few of the awards winners at the Cambridge and District CAMRA branch’s Gala Evening, which celebrated rural pubs, community city pubs and local ale pubs with an array of wonderful beers. A bustling affair of brewers, publicans and guests, this annual event celebrates pubs around Cambridge that have excelled in the last year for championing real ale and being great places to drink in. So what are you waiting for? For a full list of award winners and location details go to the website.

Solihull Jazz Fest
Solihull’s fourth annual Jazz Fest is back! On Saturday 23rd & Sunday 24th May 2015 Solihull will be filled with the sounds of Jazz. The event offers a weekend of exciting live music on two stages – in Touchwood and Mell Square – as well as entertainment across the town centre. Headlining the 2015 event will be acclaimed artists including double MOBO winning saxophonist Yolanda Brown, jazz guitarist Remi Harris, King Pleasure and the Biscuit Boys and the Broombusters.

Open Garden for NGS
27 St Peters Square W6 9NW is a magical, secret space; a plantsman’s eclectic semi-tamed wilderness. Created over the last 8 years it contains camellias, magnolias and fruit trees. Much of the hard landscaping is from skips and the whole garden is full of other people’s unconsidered trifles of fancy including a folly and summer house. Open on Sunday 10th May from 2-6pm as part of Open Garden for NGS. The Orchard is an informal, romantic garden with mature flowering trees, shrubs and imaginative planting in flowing herbaceous borders. Climbers, fern planting and water features with ponds, a bridge and waterfall feature in this ever-evolving garden. Open Sun 10th May 2-5.30pm as part of Open Garden for NGS.

A Festival of English Songs

Hogarth Singers, one of west London’s leading amateur choirs, will present a recital from the choir’s Director of Music Peter Stobart and Accompanist Andrew Wells at St Michael and All Angels, Bath Road, Chiswick, London, London W4 1TT on Friday 15th May from 7.15pm. The programme will feature a miscellany of English songs by George Butterworth and Roger Quilter, and music for piano by George Gurney and Hubert Parry. Tickets are £8 (in advance) or £10 (on the door).

Chester Races – Boodles May Festival
After months of preparing the turf, the horses, and not to mention the race goers outfits, the stage is set for the first race of the season – the Stellar Group Lily Agnes Stakes, followed later in the day by the historic Betway Chester Cup on May 6th. Boodles Ladies day will take place on May 7th with Boodles City Day on May 8th.

Amazed by Science Activities at Chester Zoo
There’s something for everyone at Chester Zoo on Wednesday 27th May 2015! Check out some of the mini creatures that live alongside us on earth every day. Examine animal and human behaviour and find out more about the incredible Islands project coming to Chester Zoo this summer. From 10am-4.30pm with an action packed itinerary for kids of all ages.

Star Wars Music Day & Final Day of the Beer Festival
Visitors to The Golden Fleece on Monday 4th May 2015 are in for a real treat: a Star Wars Music Day to coincide with the final day of the infamous Beer Festival. Live music from Mild Junk at 2pm, Stevie Brown (Swing Set) at 3pm, Jakob Deist at 4pm, Stevie Brown (Acoustic Set at 5pm) and Herbie Duo at 6pm. May the force be with you.

Rock Around the Sixties Featuring New Honeycombs & The Fourmost
Are you ready for a 60s revival nights? The new Honeycombs evolved as a continuation of the 60s chart topping group The Honeycombs. The present line up have all worked with one of the founder members and recreate silver sounds of the Sixties sublimely. Expect to hear a wide range of hits including the worldwide number One Have I The Right and Top 10 success That’s the Way. Sunday 17th May 2015 at Chelmsford Civic Centre from 7.45pm.

Wandsworth Fringe 2015
Wandsworth Fringe arts festival is back from 1st-17th May in celebration of all things arts and culture in the borough. Part of a global network of Fringe Festivals, this event provides an important testing ground and market place for new work, bringing people together creatively to deliver a unique and organic occasion.

3 Branches of the Same Tree Exhibition
The Pump House Gallery’s new exhibition brings together art, science and education, with works by three top artists working in collaboration with scientists and local schoolchildren. Running from now until May 31st, the exhibition looks at how the world is perceived through the lenses of science and art and then fusing the two together to reveal new ways to teach science. The exhibition is open from 11am to 5pm Wednesday-Sunday and entry is free.