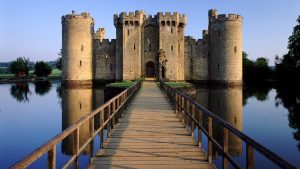 Looking for a weekend break or day trip somewhere far away from here?  Why not take a step back in time and travel to one of England’s historic houses?  Check out where to go in the UK with homeofamazing.com and time travel to days gone by…

Bowood House & Gardens, Wiltshire
Enter the splendid 18th century family house of the Marquis and Marchioness of Lansdowne, where you’ll find the laboratory in which scientist Dr Joseph Priestley discovered oxygen in 1774, and a collection of family heirlooms such as Georgian costumes, jewellery and works of art built up over 250 years.  The house sits within 100 acres of Capability Brown-designed parkland, containing an impressive collection of trees, lawns that slope down to the lake, and an adventure playground which has a life-size pirate ship, giant slides and aerial rope walks for the whole family to play on.

Stowe, Buckinghamshire
The grand estate is filled with so many historic treasures within its 250 acres of grounds that you’ll need a whole day to fully explore them.  Visit the 18th century Stowe House and roam its flamboyant rooms, where you’ll discover ceilings and walls decorated with hidden messages and mythology.  Explore the 800-year-old Stowe Church that lies in the heart of the gardens; climb up Lord Cobham’s Pillar to take in the views of five counties; and visit the Gothic Temple filled with circular rooms, a spiral staircase and Gothic windows giving stunning views of the gardens, lakes and monuments.

Buckland Abbey, Devon
Uncover the fascinating tales that lie behind the doors of Buckland Abbey, a tranquil estate that began life as a monastery in medieval England.  As you explore the grand house, you’ll discover numerous remnants of its time as a church, including secret stairs and doorways, and scarring on the walls where its transept once stood.  Outside the estate lie woodlands filled with wildlife including otters and deer, and an array of gardens full of colourful flowers where you can enjoy peaceful strolls to the sound of birdsong.

Hill Top, Cumbria
This 17th century house could be described as a time capsule from the life of British author Beatrix Potter.  Preserved to look exactly how she left it, Hill Top was Potter’s spiritual home which served as her holiday retreat.  It was also where she found inspiration for some of her famous tales that can be found throughout the farm, such as the garden where Tom Kitten played with his sisters, and the rhubarb path where Jemima Puddle-Duck laid her egg.

Quarry Bank, Cheshire
As soon as you step through the doors of Quarry Bank, its sights, sounds and smells will transport you back to 18th century industrial England.  It contains one of the best preserved mill sites in the world, and visitors are given a view of how communities in industrial areas used to live.  Explore the Apprentice House, once home to youngsters at the mill during the 19th century – you can see the leeches they were treated with in the medicine room and the straw-filled beds they slept on.