Award winning film director, artist and loyal Finchley Futon Company customer, Ken McMullen, has something of a reputation.  With his feature films distributed worldwide, his documentaries broadcast extensively and his art works showcased in leading contemporary galleries across Europe, the United States and the Far East, he is a creative force to be reckoned with.  Oh, and did we mention that as well as his artistic track record, Ken was formerly a Professor at Central Saint Martin’s and currently works as a Professor at Kingston University…

Ken McMullen’s renowned artwork Skin Without Skin is the result of a collaboration between leading artists, CERN and the European Organisation for Nuclear Research in ‘Signatures of the Invisible’, a unique collaboration between contemporary artists and physicists which explored the relationship between science and art.  The exhibition gained global recognition, achieving The Museum of Contemporary Art, Beijing’s prize for Outstanding Work’ as well as a showcase at New York’s infamous MOMA contemporary art gallery as well as galleries in Europe.

Signatures of the Invisible, was motivated by the belief that artistic practice, if it is to have meaning in the modern world, cannot derive from the artist’s subjectivity alone, but demands engagement between the artist’s intra-psychic (subjective or intuitive) processes and the external world in which we live. Until this point, little had been done by artists to address the insights offered by particle physics — quantum mechanics, relativity, matter and antimatter — into the underlying laws of nature.  Skin Without Skin was one of the artworks showcased.

In recent months Skin Without Skin has returned home to London from its extensive global tour and Ken commissioned a steel and glass table to house his artwork and was keen to offer a simple seat for viewers of the artwork.  A regular Futon Company customer, he decided that Futon Company Console Bench’s provided the answer due to their simplicity of design which would ensure the artwork remained centre stage.  As well as the benches, he commissioned the Futon Company to make cushions for the benches.  Futon Company is delighted to be involved! 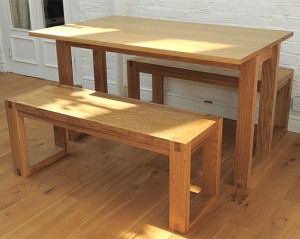