Futon Company is in the news! Commenting in the Sunday Times Home supplement feature ‘Action Stations’ by Katrina Burroughs on January 10th 2016, our founder and co-chairman Robert Pearce had plenty to say on the subject of home-working spaces.

The article’s premise was that “modern ways of working are reshaping our interiors, as the line between work time and free time blurs. A workstation in the home is now a must, whether you’re a millennial with a 24/7 freelance portfolio or a manager keeping an eye on emails over the weekend. And designers are focusing anew on that often overlooked item of furniture: the domestic desk.”
Focusing on the newly-opened Soho Works, the co-working space just opened by the Soho House group in Shoreditch, east London, the founders “saw, over a period, a huge increase in members bringing in laptops… The roles people are doing are changing.”

Journalist Burroughs goes on to say “if a month’s subscription to Soho Works is the size of your entire home-office budget, and you don’t have space for a quiet booth, you can still create a stylish workstation. Robert Pearce, founder and co-chairman of the Futon Company, has been in the business of making multi-functional, space-saving furniture since the 1980s.”

Says Pearce: “Many people are working at home and they often need a desk that can serve some other purpose, as they often have no space set aside as an office. Another big shift is the tendency for younger people to rent for much longer, as they struggle to get on the housing ladder. Small freestanding desks that fit into tight spaces, and desks that can become dining tables, are popular. [Our] Oak Diner Table (£199) is a dining table/ desk hybrid, with a shelf to store a laptop and paper while you eat.” 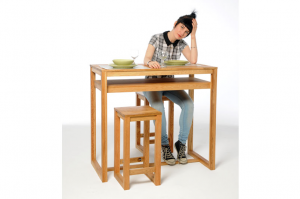