Futon Company began life in 1980 and has been supplying quality futons and small space living furniture for over 37 years... and not just in the UK. Over the years we've exported to almost every European country.

Ever since the start, we've been a small British company specialising in innovative space saving furniture, unique textiles and ingenious accessories. Almost all of it is designed in house, or by designers we have come to know over the years. As new dwellings grow smaller we have become ever more focused on being the experts in small space living.

The futon mattresses are still made by hand in our London workshop, and today's futon is a far cry from the original 100% organic cotton version. The comfort, functionality and appearance of the modern futon is light years ahead of what it was in the '80s. Our top of the range FibresprungTM Futons will easily outperform all but the most pricey of traditional sprung mattresses, and many people prefer the comfort of the high tech fibres used in our futons today.

1980
Futon Company started as a rather laid back cooperative in the summer of 1980. A group of friends were making about 20 futon mattresses a week in a combined workshop/showroom/office space of about 500 square feet, on the first floor of an old building in Rufus Street, Shoreditch. 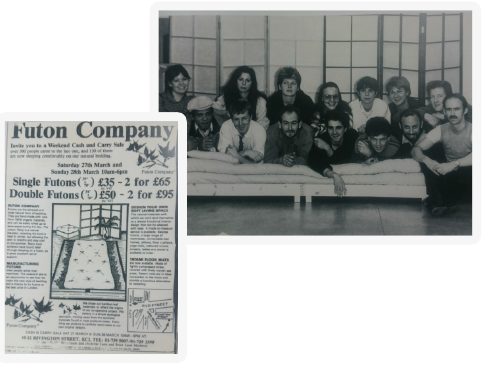 Our first small shop was opened in Archway Road. The rent was just &pound29 a week. Japanese lifestyle had become a trend and we were the first to introduce Tatami mats and minimalist furniture to the market. Inexplicably, the IRA detonated a bomb one night in the shop doorway. Nobody was hurt, but the subsequent wide publicity helped the brand considerably.

The business was given a further boost when a journalist visited the workshop in 1981 and ran a double page feature on the futon in the Sunday Times magazine. This took weekly sales from 20 futons to 200 overnight. 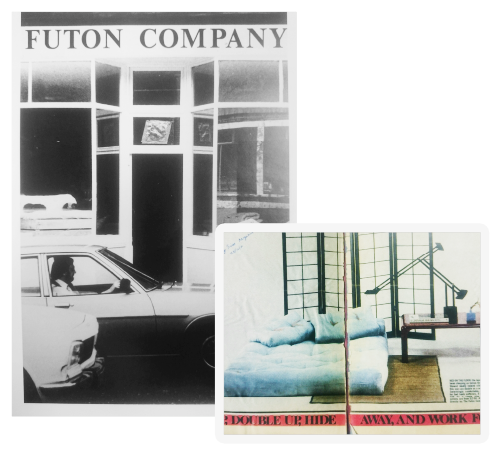 Our public success attracted the attention of other chains who suddenly wanted to sell Futon Company futons too, so that we had to move our workshop several times to cope with increased demand. Our first serious shop opened at 654 Fulham Road in December 1982 and the brand started getting wider recognition for its quality, unique design and affordability.

A flagship store was opened in Tottenham Court Road in 1984. We promoted the business with quirky advertising, using freelancers for almost everything creative. Several of them are still involved today. Our very first product brochure went out in September 1985. 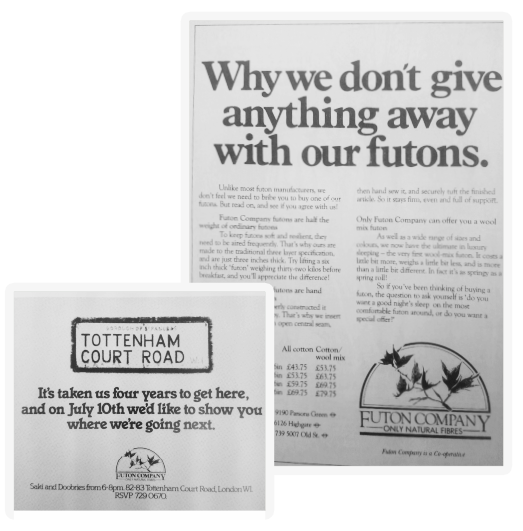 One of the founders had met a fellow minimalist in France, who became the Company's agent there and started to build a very serious business across the channel. This French connection was to have quite an influence on the Company's product range and scale of production.

Growing demand in France (including a contract to supply the French Army) and the launch of our first serious product catalogue meant that we had to abandon our Shoreditch base and take on a much larger site in Tottenham. We remained there for 26 years and only recently had to relocate again to accommodate our ever growing sales. 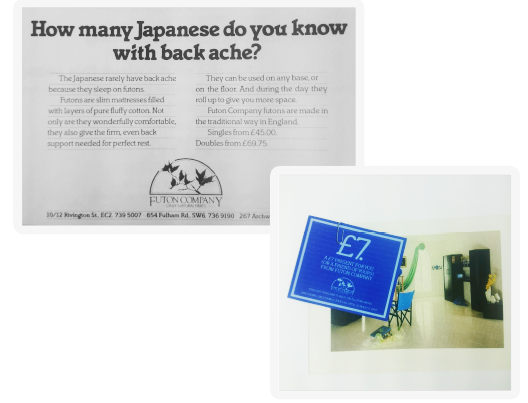 The recession of the early 90's was a tough time for the business, but by that stage we were actually selling more of our output in France than at home, and so were to some degree protected from the UK's decline in furniture retailing. As the recession eased, interest from other British chains in the futon mattress escalated.

Our first colour advertisement for mail order was published in 1993 and was a great success. This marked the beginning of our direct selling activity, which has continued ever since. 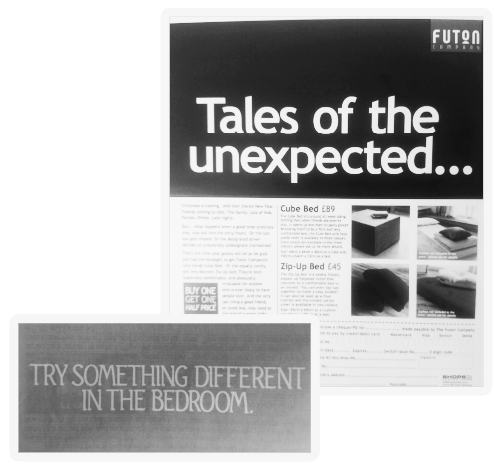 Although we were busy opening shops, and building a loyal customer base in most corners of the UK, by the end of the '90s we had also become the largest manufacturer of futons in Europe. And we had opened more than 30 stores. It was during this period that most of our current managers joined us. They've nearly all been here for 15 years or more. This was to count for a great deal in the subsequent decade. 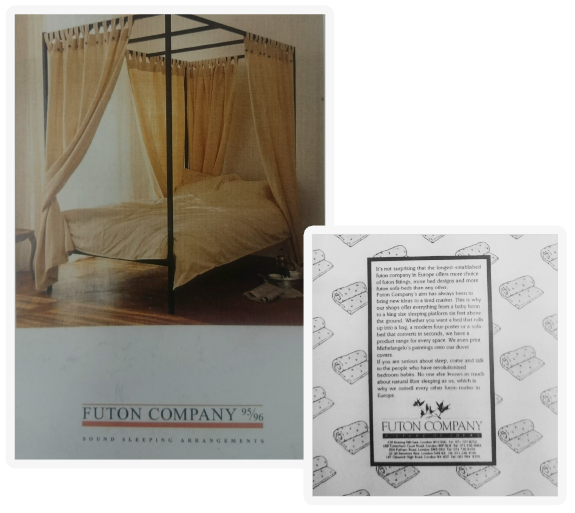 New product development became our main focus. One of the Company's founders had a spell in a tiny apartment in Japan, and this led to the expansion of our small space living range. This has proved to be very popular, and we remain industry leading experts in small space living.

In 2001 we excitedly launched our first web site. It was expensive and results were not great. But at least we now had an internet presence. 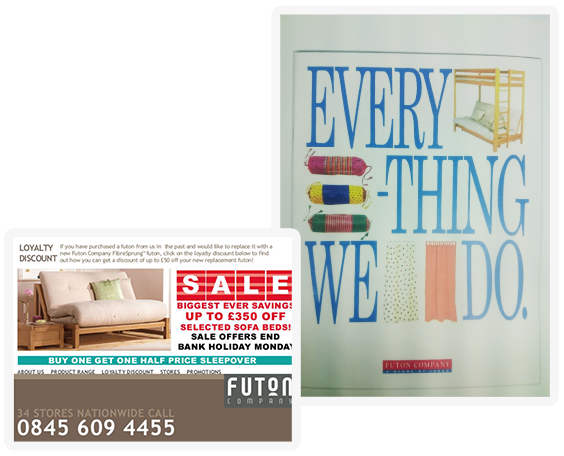 With internet shopping getting under way all around us, web site development now became a priority. We re-launched the site with full user-friendly e-commerce. It did not perform very well initially and we had to ask ourselves whether it was worth the effort and expense. But customer feedback was very positive, and with patience and a some careful refinement we experienced a very satisfying increase in web sales. Gradually the website took over the sales that we had previously made through our mail order advertising. 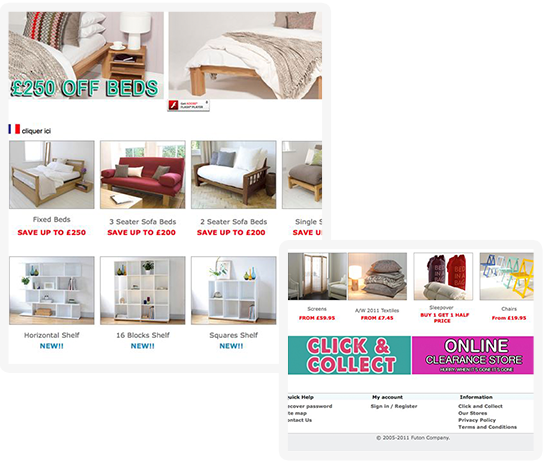 The shock of the financial crisis pulled the whole industry up short, and we were one of the just a few high street furniture chains to survive unscathed. We regretfully closed some non-performing stores and re-doubled our efforts to come up with useful but unusual product. Our long-serving management team steered us through those uncertain times, and we are excited about the opportunities ahead. 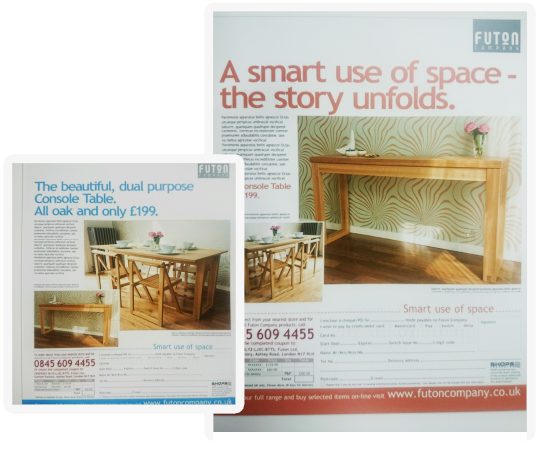 Keeping up with digital technology has become a priority, and a series of further serious web site upgrades has created even more interest in our ranges. A trip to India led us to add some very beautiful ethnic designs to our product mix, bringing additional charm to an otherwise deliberately functional range.

We didn't know it at the time, but the Tottenham riots of 2011 were to trigger a major change of housing strategy in the area, resulting in the conversion of many industrial units, including our own, to residential use. So once again we had to re-locate, and this time we chose a brand new warehouse, office and workshop in leafy Highams Park. The increased space this provided allowed us to grow comfortably for two more years. 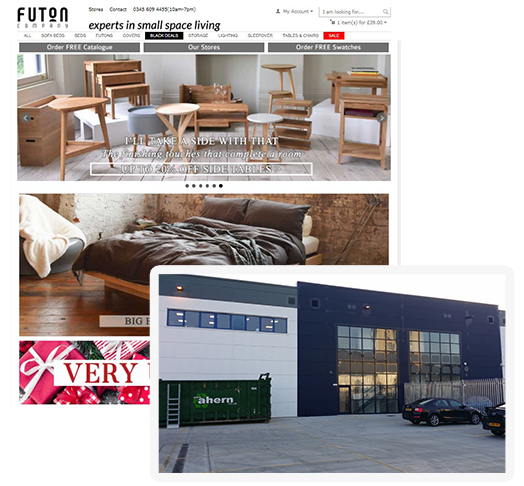 This year we took on yet more space at our new location. Since 1980 we've made well over two million futons. Some of our highly experienced futon makers and designers have been with us for over 30 years. Our web site is now our biggest store. Futon Company continues to adapt and thrive. 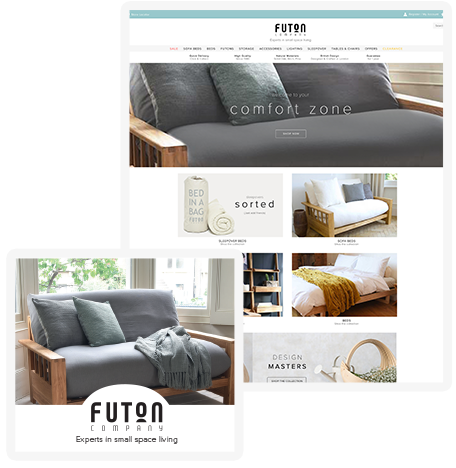